The collaborative project In the Footsteps of Eratosthenes, implemented by the Fondation La main à la pâte, began in September 2000 and has already led thousands of pupils aged from 8 to 14 to measure the Earth's circumference from their classrooms, simply by observing the shadow of a vertical stick (gnomon) at solar noon. Each year, schools in many countries join forces to replicate the observations of the Greek scientist Eratosthenes who, more than 2,200 years ago, was the first to propose a simple and original method to measure the size of our planet. 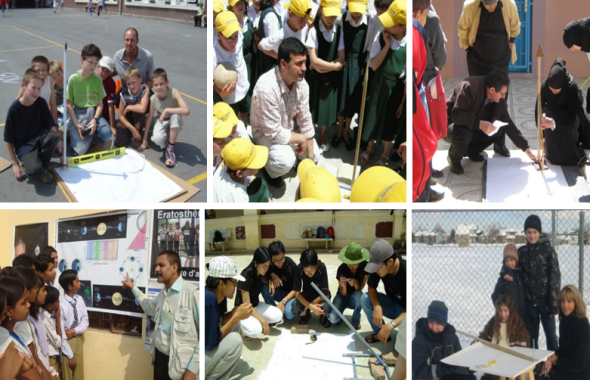 By participating in this project, students learn to observe the variations of shadows during the day and year, the movement of the Sun in the sky, and build their own measuring instruments in the form of a gnomon. By measuring its shadow at solar noon, and exchanging their results with other classes via the Internet in other latitudes, they can in turn calculate the size of the Earth.

Through this project, the pupils approach many disciplines, often in an experimental and concrete way, allowing them to acquire a wide range of knowledge :

History and geography : through ancient Egypt to situate Eratosthenes in his time and place, and by leading the pupils to locate themselves and their correspondents on the globe.

Astronomy : by highlighting the apparent trajectory of the Sun during the day and its evolution through the seasons.

Physics : by studying light and shadow, and by carrying out experiments in the field and simulations to reproduce what has been observed.

Mathematics : in particular geometry, as it deals with parallel lines, angles, triangles, circles, equality of angles, length ratios, etc.
Oral and written language : inherent to the experimental approach according to the principles of La main à la pâte, pupils put forward hypotheses, propose experiments, formulate observations and then state conclusions, either orally or in writing in an experiment notebook that each pupil keeps up to date.

Information and communication technology : through the use of the Internet, pupils conduct documentary research and correspond with other classes to exchange measurement and calculation results.

Plastic arts : this project allows everyone to show their creative talents (drawings inspired by the story of Eratosthenes, comic strips, models illustrating experiments, calligraphy games based on hieroglyphs and the Greek alphabet, etc.).

The project is made up of five activities, but its implementation can be adapted according to a number of contingencies: the age, level and motivation of the pupils, the size of the group, the time available to devote to this project, not forgetting the vagaries of the weather...

Thus, shortcuts are possible, but the "minimum course" is marked out by five stages:

If you are a teacher and would like to involve your class in the collaborative project In the Footsteps of Eratosthenes, send your message to

As the exchange of measurements between classes takes place on different platforms on the Internet (depending on the location of the participants), you will be guided to register on one of the platforms.